I mentioned in a previous post that our local branch of the BBKA, the Oxfordshire Bee Keeping Association, were planning to visit our apiary (that’s two hives in a modest garden). Lo, it has come to pass, and here is an account of the day. 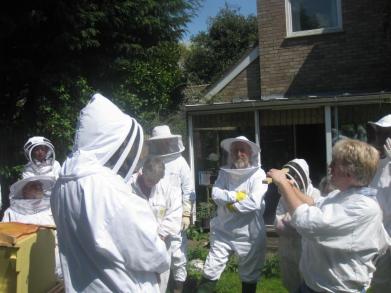 15-20 beekeepers arrived, promptly, and immediately tugged on their suits. I was glad Gareth had come along to field tricky questions once the OBKA examiner began grilling me, though it turned out he was already reasonably familiar with TBH’s and I think he was just checking I knew my stuff as I have not taken any OBKA exams! Gareth knew just as much as him, and after a series of informed mini-debates they developed a mutual respect. The atmosphere was very co-operative and everyone had fun, with more experienced beekeepers pointing out things to beginners.

‘Twas a fine sunny day for opening a hive. First we spent half an hour talking – passing around natural comb, showing the construction of an empty nucleus hive, and discussing the way a top bar hive operates. Then we opened “Hive 2”. About 6 of us could get round it at once. 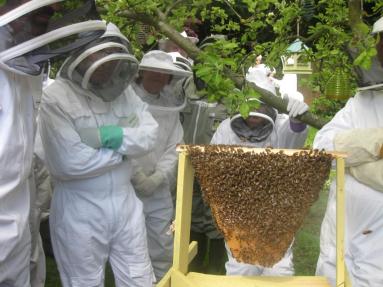 Comb formed by bees for bees

The OBKA members were fascinated to see how bees form cells without foundation. They saw chaining, clusters of huge drone cells, and many features familiar from framed foundation combs such as the arc of pollen and honey above brood. There were a lot more drones present than they were used to, of course. I showed how we use a special right-angled knife to cut the combs free from the sides (there were only a couple of minor attachments) and, in one case there was some cross-combing which we cut through, which I had to admit was my own fault for putting two spacers between bars instead of one, thus confusing the bees into thinking “there’s a gap here, let’s build another comb in it”. This dispelled the myth that TBH’s are any more prone to cross-combing than framed hives.

We got a couple of beginners who’d never handle a comb of bees to use the tools and lift combs, onto the frame holder in the picture, where everyone could view them. The examiner pointed out a drone with no wings – varroa damage. But that was the only one, and I think he was impressed by that. Towards the end we were all excited when someone spotted the (unmarked) queen. One thing which puzzled them was the complete lack of smoke – I use a smoker so little that I’d forgotten to get it out of storage. At the end of the demo the OBKA examiner advised it would help drive the bees on top of the hive back in quickly, so I tried it for a change. My impression was that it only drove half in, the other half were too small (young) to know where to go and stayed on top of the hive, so I’d just distressed them for no reason. We left the roof off the hive (but with the top bars forming a continuous seal) and after 20-30 minutes they’d gone inside normally. I don’t think I’ll try a smoker again. There were comments about how calm the bees were throughout, and the hive was open well over an hour! Although it was a warm, sunny, calm day, and these are mild mannered Buckfast bees, I think it is significant when experienced beekeepers make a comment like this, and some credit has to go to the use of low-stress natural beekeeping techniques. People also reckoned the hives were remarkably populous (about 15 bars, mid May), and although there are signs of swarming – drones, and the sister hive had built and sealed queen cells as I found the next day – it seems the colonies are healthy.

On the down side, we compared our honey crop with that of a neighbour who’d come along, who uses WBC hives about 200 metres from our TBH’s. She had a much better honey harvest last year. I’ve been thinking about this and it may be because I didn’t feed our bees during the June nectar gap; or because I allowed them to swarm, so they spent the rest of the year rebuilding their colonies rather than storing excess honey. I hope to know why after this season. Also, several National / WBC hive users got the impression that TBH’s are fiddly to use. This was partly because we spent so long pointing at things and talking about them, and partly because of the care we took going through the entire hive, getting several people to use the tools to get the feel for how to use them, and some care is required to ensure the top is sealed against wasps when you close up the hive. So the next day, when I checked the other hive,  I proved to my own satisfaction that an inspection could actually go a lot faster: as long as you’re sure the combs aren’t glued to the sides you can move multiple ones at a time.

I learnt that two attendees had TBH’s and another was about to build one, but I was too busy to remember to get their contact details. If you’re reading this, I’d be interested to know where to get the Top Bar queen excluders you mentioned, to stop the queen laying in honeycomb – you can email me through the Contact Us page.

I hope to see you all at Susie’s this coming weekend!