Posted on September 2, 2015 by brianandfaith

Most people have been stung at least once in the past year. This highlights the need for some safety considerations. If you have had a reaction to one sting and tend bees alone then an epipen is probably a good idea. We also discussed the importance of eye protection as a minimum when around bees. Bees behaviour can change between visits. Helen described being caught by surprise when she crushed nepeta (catmint) near a normally calm hive and the strong smell aggravated them. Queenlessness also causes unruly behaviour.

Ann has looked into ventilated suits. These appear to be cooler, more expensive and very thick.

Colony progress: Ben described his 2 Warre colonies. He got these as swarms 2 weeks apart earlier this year. One is thriving (3 boxes) and the latter one never really got going. He suspects the 2 weeks’ head start made a big difference though there are always other factors.

Everyone except Helen and Ann reckon their colonies need at least some feeding – the NBU’s nationwide starvation alert certainly applies to the bulk of Oxfordshire.

Ann has made a steeply pitched roof for her TBH allowing use of a shallow doughnut-shaped “English” feeder in the roof space. You need to have a bar with a gap in it to allow the bees access. Brian & Faith are using a Mini Ashforth Feeder from Thorne which is now getting a lot of bees using it. The rate of consumption suggests that although the bees looked ‘happy’ previously they were indeed hungry. Since feeding started some additional comb construction has also begun. So for us novices the answer to the question ‘when to feed?’ would appear to be ‘when everyone else says that they are feeding’. There was some discussion of hefting but that does rely on some experience. Since the meeting B&F have rigged up a weigh-in process for a Warre box. This should allow the total weight to be monitored over time and hence the change in weight can be logged (and the rate of change).

Ann has made a trap out box. (Put harvested comb in, bee escapes – one way valves for bees – mean bees on comb fly out but not in). After a couple of days no bees allowing easy harvesting.. (there is an email update to this; briefly whilst the bees left the wasps came in and helped themselves; design mods required?)

Paul demonstrated honey crusher / strainer. Key points are the fragility of the filter and the need for keeping everything clean. The strainer does let some hive debris through. But an extra muslin filter would lose a few jars of honey. But we are natural beeks so extra hive material is a good thing! Paul also showed us some comb with unripe honey. This has a distinctive smell and would only be any use if consumed within a day or so. It will ferment after that and be useless.

Hive issues Mary is having problems carving the end panel of her log hive (incredibly hard wood). Di offered disks of whatever size needed, having been chain sawing lots of trees recently.

Di has potential problems with badgers and we discussed her idea of using 4 foot high tree stumps as Warre platforms. Thought it would make hive manipulations very tricky and potentially unstable in adverse weather etc. As most Warres are simply stacks of boxes we discussed some methods for avoiding toppling. Guy ropes and pegs is the obvious start point. 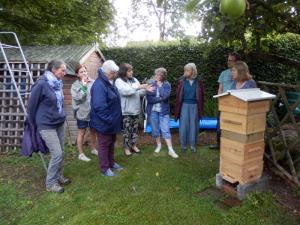 We looked at a Warre in the garden (slightly modified to accommodate a swarm box from Peter).  No hive inspection was done but all seemed ok through the window.

And also a bee hotel. Some bees used this within days of it going on the wall in the spring. They seem equally happy with canes or holes in wood.

Biosecurity. The bee inspectors reckon the recent outbreak of AFB in Bucks was due to someone leaving used jars of foreign honey open, to feed bees. Helen described how her allotments are using some old honey containers from Rowse as water butts. One has lots of New Zealand manuka in it. Bees and wasps gorged on this.

This entry was posted in Meetings, Stings, Warré, Wax and tagged Badgers, Desensitisation. Bookmark the permalink.