My first fortnight of beekeeping (and the two-swarm, one-hive mystery)

I had only half-believed that it was possible to attract a swarm. I knew about it in theory, but it just seemed so unlikely that a swarm of bees, with a whole world of hollow-trees and unsealed roof-spaces to call home, would choose to settle in a hive. But in one week two swarms found their way to my garden, and (against everything it says in the books) took up residence in the same hive.

I am new to beekeeping – I’ve had a summer of helping an amateur beekeeper with inspections, and read a few books about it. I found the subject fascinating, and when my beekeeper-friend moved away from Oxford last winter, I became the owner of a dead top-bar hive.

In March, I cleaned out the hive, salvaged the empty comb to act as ‘bait’, and left it in the garden, with some lemongrass oil to help draw-in a swarm. Through the spring it stood empty – there was a brief flurry of excitement when visiting bees found the last dregs on honey in the old cells, but there was no sign of a colony moving in. Spring came and went. There were no bees. I’d misremembered a rhyme about a “swarm in June, not worth a spoon”, so with midsummer approaching, I’d given up any hope of their arrival.

They arrived on the penultimate Thursday in June. I didn’t see them fly in – but when I returned from the polling station, the hive-entrance was buzzing with activity. Somehow, by whatever mysterious consensus they use, the swarm had chosen this garden, and this hive, to be their home. Would they stay? Would they leave? In the next few days, as the world was distracted by referendum results, I was fascinated by the unfathomably strange outcomes of this democratic decision-making. 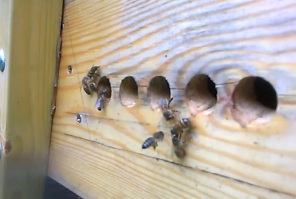 “the hive entrance was buzzing with activity”

A few days passed – the bees seemed to have settled. I worked-from-home for most of the week, taking every opportunity to watch the activity at the hive entrance. Days were spent in front of the computer screen, but whenever the phone rang I’d head for the garden to sit by the hive, to watch the to-ing and fro-ing of the bees while trying to concentrate on whoever I was talking to. They were bringing pollen in, which was a good sign. I didn’t see any drones, but I wasn’t sure whether this was because they weren’t any, or if I just wasn’t recognising them. I’d also not seen any dead-bees thrown from the entrance – which I took to be a bad sign: a healthy colony should be cleaning out any dead bees, but there was no sign of that.

It was just before nine o’clock on Wednesday when the second swarm arrived. It was bright, but the sky was threatening another day of unseasonal drizzle. Bees were going in and out of the hive in what I think were their usual numbers for this time of day.

One bee had fallen into damp grass in front of the hive. I lifted her up, and spent a few minutes watching her dry her wings in the sunlight – enjoying the slow evaporation of tiny water-droplets. I’d watched the same thing the previous day – I’d rescued a bee from drowning, and let her stand on my fingertip to dry in the sunlight.

I had given syrup to yesterday’s bee – a knife-tip drop – just enough energy, I hoped, to replenish the strength of her body. I had watched a slow tongue uncoil – she licked at the syrup, first to taste, and then sucked in the sweetness as if through a straw. I know that saving an individual bee is immaterial to the success of the colony, but it was fascinating to watch her so close-up, and to revive her enough to see her return to the hive.

Back to the day of the second swarm… The bee was drying herself, but didn’t seem to have the energy to take off. Maybe some syrup would do the trick this time too? I let her crawl onto the roof of the hive, and went to the kitchen.

No more than thirty seconds later, I returned to the garden. The garden was alive with bees. The air was thrumming with them. It was a swarm: a wild flailing cloud of honeybees. The swarm was as long and as wide as the garden, and as high as the house. There were at least two bees in every square foot of air. The sound of them was incredible – a buzz, as loud as a vacuum cleaner, but gentle, as twenty-thousand bees or more sought out a new home.

They were not aggressive towards me. I stood in the middle in short-sleeves and sandals, and wasn’t so much as bumped-into. But were they being aggressive towards ‘my’ bees? I was totally sure that the visitors were not the bees from the hive – I’d been right beside the entrance for the minutes before, and would certainly have noticed that many bees emerging. Perhaps they were invading – a stronger colony trying to take over the hive. It seemed the only logical explanation.

I looked at the hive entrance. It seemed normal – foragers going in and out. I tried to count whether there were more entering or leaving. If anything, there were more going in, but it was difficult to judge. At first, the swarm seemed to be ignoring the hive.

After about twenty minutes of thronging in the sky, the entrance of the hive began to darken. The swarm was settling there – finding its way in through the five entrance-holes. I was expecting a fight at the entrance as the existing swarm defended against the intruders. However, there was no resistance at the mouth of the hive, and no dead bees.

Slowly, the swarm found its way inside – the front panel was black with bees, the entrance alive with them, all crawling in. The buzzing cloud slowly reduced in size – the same density, but like a deflating balloon, with the air they occupied shrinking towards the hive entrance. After a further twenty minutes, the garden was quiet again – bees foraged as before, and were calm when I sat by the entrance. If I hadn’t been in the garden when they arrived, I would not have seen any sign of the mysterious second arrival.

A week on, and all seems to be going well. I peeked inside the hive when I removed the lemongrass-oil, and they’re definitely building comb. But I’m planning to leave it a few weeks before a proper inspection – which, I hope, might solve the mystery of the second swarm.

There were some possibilities about what might have happened. The most obvious thought is that it was a hostile invasion, but there was no fighting at the hive entrance, so that seems unlikely. The second option is that there could be two colonies cohabiting the same hive – sharing an entrance and nesting at opposite ends – in a “semi-detached hive” setup.

The third option is that two colonies decided to combine. Perhaps a queenless swarm latched onto the queen pheromone, and was drawn in by it. Or that a queenless hive welcomed a travelling queen and her entourage.
I hope that two colonies have combined – that in the last week of June the bees decided they would be stronger united than divided, that outsiders should be welcomed to the hive, and that peaceful co-operation between colonies is far preferable to mistrust, isolationism and division.

This entry was posted in Swarms, TBH and tagged Swarms, TBH. Bookmark the permalink.

18 Responses to My first fortnight of beekeeping (and the two-swarm, one-hive mystery)