Drones are as long as queens (though this queen has curled up in death). Their huge eyes and stingless rear end give them a more rectangular shape than workers. Click for larger image.

Conventional beekeepers aiming to maximise honey production suppress swarms, replace queens with ones from breeders, and cull drones as a “waste of resources”. This post covers some of the less discussed, subtle implications of drone genetics; and advantages of queens mating with multiple drones, colony control of supersedure or swarming, and allowing colonies to raise the number of drones they feel appropriate, as favoured by natural beekeepers – and bees.

In some marginal areas, colonies don’t have the spare resources to swarm every year. Instead, they prioritise supersedure, and for these rarely-swarming colonies, drones are their main way of spreading genes. Such “superseding strains” of bee are found in parts of the UK and tend to have low numbers of long lived bees: the queens have been known to live up to 8 years! They may only swarm every 2, 3 or even 4 years. (Beowulf Cooper, Honeybees of the British Isles, chapter 4.)

Occasionally, beekeepers who wish to rapidly spread a strain in an area use the same strategy, deliberately flooding it with drones (using foundation with drone sized cell patterns).

I first heard about miticide links to increased queen failure from Ron Hoskins, who experienced high levels of queen failure as soon as he began using miticides – this was a key reason he decided to go non-treatment, whereupon queen fertility returned to normal levels. This has since been explored and explained by Lisa Marie Burley in her much-cited paper on The Effects of Miticides on the Reproductive Physiology of the Honey Bee. (In particular section 2.2 – note that even thymol, used by some low intervention beekeepers impacts brood production). It turns out that drones only reach maximum sperm production 12-13 days after emergence as winged adults (Winston, Biology of the Honey Bee, page 41) and miticides tend to reduce their adult lifespan. So if drones come from a miticide treated hive, queens are more likely to meet and mate with younger drones, and less likely to get a full load of sperm. Queen failure, where a colony dies from lack of new workers, has several causes, such as dwindling egg production with age; but a common one is when the queen simply runs out of sperm, can no longer lay fertilised eggs (workers) and becomes a drone laying queen.

This colony has deliberately ejected drone brood damaged by varroa

Conventional beekeepers sometimes comment that they have to keep removing “excessive” drone comb. Colonies, particularly superseding strains, will tend to have a target number of drones which they feel is appropriate. Culling drones just makes such colonies prioritise raising more drones, not honey-making workers.

Varroa preferentially target drone brood and some beekeepers use drone comb (foundation can be bought with various cell sizes including large ones which make the workers build drone comb) as a sacrificial trap to attract the mites, they then discard the entire comb. Some hygienic bees use a similar strategy but only eject the larvae they detect as infested; the photo shows the landing board of a varroa-resistant colony in May 2015.

Like large bumblebees, which need to feed every 30 minutes, drones can’t stay airborne long – their longest recorded powered flight is about 70 minutes and it’s usually half that. They head to drone congregation areas and try to extend flight time by circling on thermals. At any given time there are as many drones flying to such a site, and returning home to refuel, as there are at the site – so colonies need to raise lots of drones.

Drones don’t waste time landing to feed from flowers, instead they are fuelled mouth-to-mouth by workers before leaving the hive. We often describe them as lazy for not gathering food, but no doubt the bees find this a more efficient way to use the drones’ limited time to spread the colony’s genes.

Mating is a one time affair for the drone. When he grasps a queen his abdomen contracts, causing the pressure of his haemolymph (blood) to rocket and push his sperm out, sometimes with an audible pop. The queen then flies off, with the “drone sign” (part of his endophallus) still in her. The drone dies, much like a worker dies when her sting remains in your skin. 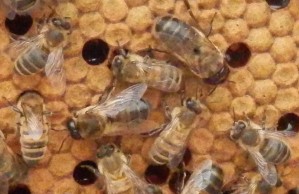 By preference, a queen mates with many drones from the area, typically 13, giving a range of half-sibling children in the hive. It is thought this gives the colony a greater range of abilities and resistance to pests. This extreme polyandry is such a fundamental evolved survival trait, I’ve never heard of it being bred out of a queen.

In contrast, human breeders use tightly controlled breeder queens who are artificially inseminated with drones of the same breed. This is time consuming so most queens sold for regular honey production are the daughters of these breeders. These daughters are allowed to free mate at the human breeder’s apiary, which has dozens of hives to flood the area with drones, and is in a deliberately isolated area so the beekeeper can be reasonably certain these daughters will mate with others of the same race. These are then sold as pre mated Buckfast, Italian, etc queens. You only need an expensive ultra-selected breeder queen if you intend to raise your own queens, but most honey producers just requeen with the daughters from a breeder they trust rather than invest in artificial insemination equipment, a large isolated apiary etc. If these daughters then free-mate with random drones they encounter, the progeny tend to lose the exceptional traits of their mothers which is why honey-focused beekeepers occasionally restock their apiaries with new queens purchased from the specialist pure-line breeders.

Early research indicated that the children of a queen tended to be born in batches from the same drone father, but more recent, more accurate research with DNA technology has shown that the drones’ sperm is in fact mixed together quite randomly in the queen’s spermatheca [storage organ] over a timescale of weeks. The ratio of subfamilies do change slightly over timescales of months.

The mix of children present in an open-mated hive is never more than ~30% from one father, and usually no more than 16% from one drone – though some drones’ children only comprise 1% of a hive’s population.

There are theories that subfamilies of bees in a hive (full sisters, all with the same drone father) may compete in certain circumstances, for example once their queen mother has left in a swarm the half-sister subfamilies may compete to ensure that the next queen is one of their own full sisters. Obviously a faction comprising 16% of the hive might be able to pull off a few tricks which a 1% faction cannot, like rapidly uncapping “their” virgin queen (a full sister, remember) so she can go sting her half-sister competitors to death before they emerge. Whilst an engaging idea, I’m not aware of research supporting this. It does, however, help explain some behaviour of casts which emerge with two or more queens, resulting in a disorganised swarm. Perhaps the half-sister factions cannot reach consensus about what to do next.

Another odd swarm behaviour is a “false swarm” where the bees leave, then return to the hive. This is often attributed to the queen not flying due to clipped wings, not being slim enough (the workers starve her for a few days to get her down to flying weight), or not enough spare bees for a viable swarm. But perhaps this is due to an unpopular queen from a minor royal family being unable to recruit enough followers from other factions!

As shown in the diagram, a queen’s chromosomes are arranged in pairs, and drones just inherit one strand (chromosome) of each pair. In free mated colonies, brother drones are not identical, because which 1/2 of their mothers’ 16 chromosome-pairs they acquire is random; but all the sperm from one drone are identical, because their 16 singlet chromosomes are not paired, so there’s no recombination phase (meiosis) to randomise their alleles.

A quick guide to drone genetics. Click to expand.

Inbreeding eventually leads to a buildup of recessive genes and bees are unusually sensitive to errors in their sex determining genes, which results in a “diploid drone” (sort of a feminised drone) which the workers won’t tolerate and eat(!) in the larval stage, which is one cause of a “shot brood” pattern. With excessive inbreeding, the proportion of failed young and empty brood cells (diploid drones) can increase until colonies become non-viable and collapse.

However, for very pure (inbred) lines of bees, each half of the queens’ chromosome-pairs is nearly identical. There is very little variation between the drone children of very pure line queens, although breeders such as Glenn Apiaries allow the semen from about 200 drones to mix before inseminating a queen. Without serious precautions and meticulous record keeping, racial purity increases the risk of a duplicated sex allele, creating a diploid drone.

So pure race breeders need to keep very careful records of breeding histories, to avoid this risk; they deliberately maintain several gene lines themselves and swap genetic material with other pure-race breeders.

Bee breeders tend to only mention the females on their breeding charts as drones are simply subsets of their queen mother’s genome.

In conclusion, this illustrates the importance and advantages of a wide gene pool in honeybee genetics, and how tricky it can be for breeders to avoid inbreeding problems when using limited gene pools. I plan to write a further article on other advantages of open mating.