Eight beeks and some interested neighbours gathered at Gilliane’s house on the edge of Oxford to see her hive upgrades with cork insulation, how she remotely monitors the temperatures inside them, and to swap bee stories.

Gilliane has already blogged about her initial insulation and measurement experiments here, and has since been working on insulating a second TBH – which is unoccupied so she can do a more extensive job on it.Gilliane’s hive mods are characterised by a simple elegance, as the photos show:

Window cover, illustrating how thick the walls now are

Gilliane has been using cork sheets from Mike Wye to upgrade her hives, which are from Thornes and made of English Cedar. Cork is about 2.5 times better an insulator than cedar. This picture of the removable window cover gives an idea of how well wrapped her bees are now. The dark layer is cork, and there is a thin layer of ordinary ply on the outside for weather resistance (though inretrospect marine ply may have been better).

Gilliane has covered the (flat) roof with a water repellent membrane as the original wood got wet through after a year. She sprinkled water on the material and drops rolled like marbles or mercury atop the roof: it sheds water brilliantly.

We discussed the usual winter preparations like fitting mouse guards (bees can’t defend their entrances when they are clustering in the cold), and ensuring hives cannot blow over in winter gales.

Paul mentioned that he has not fed his colonies this winter. In previous years, even over long winters, they have consumed far fewer stores (3 to 5kg) than the BBKA says they need (20kg); feeding in Autumn simply led to large amounts of tasteless “honey” which was obviously just bee-processed sugar syrup, with no floral component! He ascribes this low consumption to a number of factors: 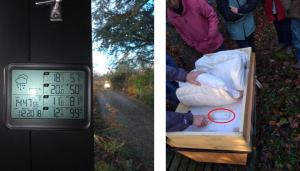 Wifi sensors in e.g. in hive roof send data to monitor in house, next to window

Gilliane uses this wireless temperature measurement system (£49.96) to monitor temperatures in and around her active TBH. The sensors are battery powered and two are placed above the bars, under extra insulation she’s filled the roof with. Although not touching actual bees or comb, this averages and reflects the activity in the hive cavity below. Another monitors external temperature.

Some of Gilliane’s Autumn results

The graph shows some results. Sensors numbers 1 (blue) and 2 (red), above different bars, track the slow changes in ambient (green) trace over several days, but smooth out the rapid fluctuations, showing how the bees contrl their environment. Sensor 1 must be above brood because it’s significantly warmer than ambient; sensor 2 is above an area where activity, and thus extra warmth, is more intermittent.

There has been increasing interest in instrumentation recently. Temperature is relatively easy, and useful – giving you a non invasive clue to the health and activity of a hive.

In addition to Gilliane’s WiFi temperature monitoring, Brian monitors temperature using a datalogger with a removable memory card as his hive is beyond WiFi range. Jack wired up his hive for sound, using physical wires to a speaker in his kitchen. Another useful metric is real time monitoring of weight, but placing an entire hive on a permanent scale can be tricky. We have heard of people monitoring humidity, but it’s not clear if that’s very useful.

There’s always a tradeoff between “this would be fun / useful” and how expensive and difficult something is to achieve. Perhaps the key point with hive monitoring is, does it give you something you can’t get another way? For example you can, for a price, equip remote apiaries to send you a text message if a hive is moved.

Huge thanks to Gilliane for opening her home and apiary to a bunch of beekeepers, the cake and biscuits, and giving us so much to think about!

Next meeting: TBD, probably in Oxford