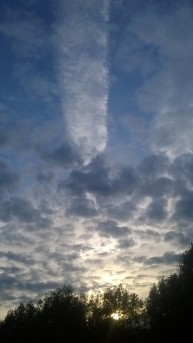 “So what are you going to do with the bees?” it was the first question that anyone asked when I said I was moving house. The bees had lived for two years in a back-garden hive but now the tenancy was coming to an unexpected end. I needed to find new places for both me and the bees to live – and house-searching with a bee colony in tow didn’t seem to be a sensible option.

“Can you set them free?” asked Cassie, one of my colleagues. I tried to explain that they were already free: “they can already go wherever they want, they choose to come back”. Yet somehow she imagined that I could unpick whatever sage-scented magic drew them into the hive and send them pouring forth into the world, perhaps the swarm forming the shape of an orca whale as it brushed my outstretched fingertips and breached over the fence towards the Elder Stubbs allotments.

Friends offered me corners of their gardens so I could continue my keeping of them. But Cassie’s question stuck with me, and I quite wanted to find a way to set them free.

I remembered that a neighbour had asked me about bees a few years ago. He owns a plot of land in the Chiltern Hills, which he has planted with apple trees and grape-vines. There’s an area for crops, an area for wildflowers, and a strip down the side where he test-flies his homemade aircraft (“the Wright brothers didn’t need flying lessons”, he says, confidently, “so neither do I”). There’s a beechwood nearby, some farmland, and an apple-orchard the other side of the wide old hawthorn hedge. He wanted honeybees for pollination, to set up a hive and let them live freely without intervention.

One evening in March, we went to his field – I picked my way up the muddy track towards the corner where the hive could stand. A hare broke from cover and I whispered “hare” and followed its swift path with my fingertip; larks rose from the uncultivated grassland; a red-kite landed, saw me, and flew off again. It was worlds away from the buses and noise of the Cowley Road, but it seemed like somewhere where the bees could thrive: safe, sheltered, and with rich forage. When I got home I told the bees about the place, whispering to the sleeping colony that they would soon have a new home.

These bees had got me through a lot. It was a strange two years, and I had told everything to the bees – the fears, worries and griefs. They did not understand my words, but I observed the purposefulness and a gentleness with which they lived, and their presence was their reply. They demanded that I thought and acted in the same way, and their unhurried being reassured me.
I had met beekeepers too – the strange and gentle people who were learning the ways to keep their bees. I appeared as a character in a book about bees – a beautiful piece of writing into which I crash, clumsy and seal-like, brandishing rusty garden tools and enthusiasm. And I experienced the emotion and responsibility of ‘keeping’: felt the subdued rush of adrenaline when lifting top-bars or hiving a swarm. And there was the constant longing to hear or see like a bee, to somehow understand some part of their ungraspable way of experiencing existence.
🐝 🐝 🐝
After a few weeks waiting, the ground became dry enough for us drive the hive over the field. We waited until the last foragers were home for the night, and plugged the flight-holes with corks. Then we loaded the hive into my neighbour’s old Post Office van, and set out towards the hills.
The hawthorn had newly flowered, and the hedges glowed white in the moonlight as we bumped the van across the field. There would be plenty here for the bees to forage, and as we heaved the hive from the back of the van, I hoped they would adapt quickly to their new home.
Lit by headlight beams, I uncorked the entrance. Bees crawled out, so I was certain that the flight-holes hadn’t been obstructed by any fallen comb during the journey. I said one final goodbye to the hive, and then I hurried back to the van. We drove back to Oxford in a strange silence.
🐝 🐝 🐝
I had tried to think of the colony of the whole, but what most stuck in my mind were the individual bees; the brave bee flying out in darkness to observe my nocturnal observations; the five bees forming a loyal guard around the body of a dead queen; the bee that flew above the flames when I burned the remains of an dead-out colony (as if to check that proper rites were observed), and the bee that flew through the window as friends exchanged wedding vows (as if to check that proper rites were observed).

I can’t keep a hive on the boat, but I knew I wanted to have bees around

In my last few weeks at the old house, the garden was quiet. The trees were coming into leaf, but there was something that felt ‘dead’ about the place – a silence and stillness filling the space where the hive once stood. I kept walking out to watch the bees, and being surprised by the emptiness.

I have moved away now, made a shift from the earthy-airy world of bees to the watery-firey world of old canals and diesel engines. I am typing this from the Thames, in a 50ft narrowboat decorated with painted snowdrops. “Galanthus“, I thought when I first saw them, “good source of early forage”. On my first day aboard I visited a friendly canalside garden centre and bought lavender plants for the roof. I can’t keep a hive on the boat, but I knew I wanted to have bees around.
And my box of beekeeping-equipment is safely stowed in the cabin: a suit and hive-tools and the old nuc-box. And I’m still happy to be called up for swarm-catching and helping with other people’s bees when I have the chance. There is so much I have still to learn. Perhaps I’ll keep honeybees again one day, but for now, inside this floating steel hive, I’m finding new ways of being and new places for living.
Happy beekeeping everyone, and thank you.
🐝 🐝 🐝
Jack Pritchard, Oxford/Hackney/Brentford
===
Notes on previous posts
The cob hive is still sadly untested. It was too heavy to move, so I chipped out the cob lining, and have given the hive to a new beekeeper.  I’m interested to know if anyone else has success with this material.
Ambitious plans for automated monitoring of the hive-microphone came to nothing (but experience of basic electronics has given me all sorts of ideas for narrowboat-projects).
The visits to bee pubs have continued at a slower rate – and I suspect in the next few years I will be limited to only canalside Beehives.
The long-awaited blog-post on the terminology for angry/ornery/territorial/defensive bees remains in perpetual draft form until I gain a better understanding of the Sapir–Whorf hypothesis and linguistic relativity.
Jack ( pritchard237@gmail.com )

This entry was posted in TBH, Uncategorized and tagged ending, experience, Moving hive. Bookmark the permalink.