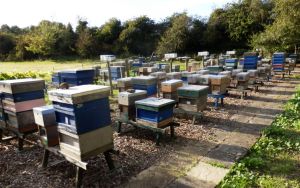 Not the usual haunt of natural beeks

A potential problem with a natural beekeeping group is: members never talk to conventional beekeepers. So 14 of us visited a large (80 hive) commercial apiary… with a twist. It’s run by the Swindon Honeybee Conservation Group, headed by Ron Hoskins, who has been keeping bees since 1943 and is as skeptical about conventional beekeeping practises as he is about ours! However he came to some similar conclusions… about 20 years before natural beekeepers did!

Ron is famous for observing – way before anyone else, back in 1995 – that some of his hives were naturally resistant to varroa, and then using conventional bee breeder techniques to meticulously conserve and amplify these traits. He’s also the most experienced beekeeper I know so well worth listening to for the gems he drops into conversation.

The key difference between his system and ours is that he selects the parents of their bees, based on rigorous measurements of varroa resistance traits in their parent hives, whereas we natural beekeepers permit open mating and let natural selection winnow the unfit ones out. So you would expect the Swindon bees’ varroa resistance to be much stronger than our bees’, and to arrive at it faster, but our bees to have more genetic diversity. The truth is more nuanced.

The Swindon group use microscopy to systematically monitor the debris on the baseboards of hives, 6 days a week. It is immediately apparent to visitors that the operation is a serious scientific project which has been running for decades. What distinguishes Ron’s approach is that he already has a large complex system to study, the apiary. He observes this keenly, understands what’s significant in those observations, and he is very empirical: he uses whatever works and works out why later. The traditional scientific approach of forming and testing a hypothesis is much slower.

I covered a previous meeting with Ron in Wisdom from an Old Beekeeper, where you can read about British Black Bees (Amm) and the varroa control mechanisms found in his bees (eviction of infested larvae [“hygiene”], mite biting, and virus superinfection exclusion). So here, I’ll cover some new stuff I learned from him.

Ron and Eddie started by giving us a lecture on varroa and bee breeding techniques. This was prepared for some Swiss researchers who visited them recently so following it stretched us a bit, which was good.

He described how in the 1980s he had been breeding pure Black Bees; I’ll skip the graphic pictures of instrumental insemination techniques. This meant that when varroa arrived, he had exactly the right skills and equipment to pivot from Amm breeding to conserving and amplifying the varroa survival traits he saw in some colonies. 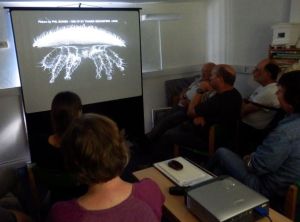 What is remarkable is that he was almost the only person in the country to consider doing this, and the only with with artificial insemination experience. In 1992-3 huge numbers of UK colonies collapsed due to varroa and 2/3 of beekeepers just gave up the craft. Even now, the BBKA is awaiting a magic bullet to “solve the problem of varroa”, ignoring the growing number of people who have bred from survivor stock saying “what problem?”

No one is interested in funding this work because if the bees develop a permanent cure for the root problem there is no money to be made from treating the symptoms!

The Swindon apiary is primarily a queen rearing operation, honey is incidental. They feed in dearths, and to get new colonies going, but they are not trying to continuously maximise the laying rate (a bee farmer, who moves hives around the country to maximise honey yield, would buy e.g. Buckfasts which have been bred to lay at a high rate continuously). So their varroa resistance must be stronger than that which our own style encourages, because there will always be some brood for the mites to parasitise. Also, some people say our naturally selected bees lose their varroa resistance when transplanted into framed hives where the Swindon ones do not. So why isn’t everyone using their bees? My impression was that Ron’s group are not marketing their bees widely, they are mainly interested in creating a strong local strain of bees.

Ron mentioned that queen rearing has been tricky for the last 3 years – for some reason, perhaps to do with forage or odd weather patterns around Swindon, even he can’t persuade the bees to raise many extra queens recently.

I was surprised to hear that all these bees originate from a single founder colony of Amm. Although Ron had more than one survivor hive, he realised only one was thriving. So he used its queens and drones to create the original resistant strain. I asked if this meant the race was inbred. No, because he only did it for 1-2 years and then he was careful to outbreed once the mite resistance was established. By queen swapping experiments he knew it followed the queens, so he conserved those and introduced local drones. He also catches swarms, evaluates their mite resistance and uses them if they seem good. The apiary is now a hybrid race with roots many generations ago in Amm, but with added genetics from whatever other beekeepers in the area have used.

An interesting point was that when beekeepers began using formic acid, to treat mites, this was fraught with problems as it wasn’t just hazardous tothe human applying it, it was easy to kill a colony by overdosing. It’s coming back into fashion and people seem to have forgotten why it was abandoned.

An example of his observational skills: back in the 90’s he found varroa weren’t hard shelled as everyone told him. They may look like crabs but they are soft skinned. This is probably why bees can damage them by biting. However dead varroa dry out and their shells are hard. It was findings like this that reinforced his conviction that the Experts were operating on assumptions rather than facts. He reminded us that recently, it’s been found that varroa don’t feed on bee haemolymph (blood) as everyone said for 25 years, but their fat!

He’s also not convinced that varroa preferentially infest drone brood, he’s seen no evidence of this, which casts doubt on the practice of drone culling to control mites…

He commented that varroa seems much less destructive now than when it arrived, perhaps the initial strains were too destructive and killed their hosts too efficiently.

Many thanks to Ron and Eddie for their time and hospitality. We all left with much to think about.