This blogsite has been a little quiet recently because contributors have been beavering away on various projects bearing fruit elsewhere.

Andrew has written a book!

The Drayton Hive is a sophisticated design using conventional, deep frames in a super-insulated horizontal hive. It was designed by Andrew, who has written this website describing it.

Here’s another, much more modest winter project: I wrote an article called Insights from natural beekeeping for the British Bee Vets‘ November newsletter. I think the editor had a bit of fun as he placed it just after an article stressing why you absolutely must treat for varroa. That’ll make ’em think.

It’s great that they are willing to discuss natural beekeeping openly. Vets, of course, see animals in a wide variety of settings and are well aware that ones in low stress natural environments experience lower levels of disease than intensively farmed ones, so I think they’ll have open minds to the idea of simply enabling varroa resistance by not “helping”.

In some countries bee vets have a formal role in bee husbandry, enshrined in legislation, but in Britain such functions tend to be done by bee inspectors. Nevertheless a group of interested British vets formed a group in 2015. With their broad and varied experience, I hope we can learn from them.

More news on other projects as they come to fruition.

On a mild autumnal day, 14 happy beekeepers attended our 10th birthday gathering – yes, Oxfordshire Natural Beekeeping Group has now been around for a decade! This could only mean one thing – lots of cake! Oh and bees.

Highlights of the day, in addition to an extended lunch, included a demonstration of harvesting a Warré hive; viewing a Drayton hive, and a walk round the village to see wild colonies and some truly wonderful gardens. But as always, the main thing was meeting like-minded enthusiasts, which is what has always energised this group.

END_OF_DOCUMENT_TOKEN_TO_BE_REPLACED

25 folk gathered at Gareth’s rural apiary to listen and learn from his 50 years’ experience and experimentation. We were honoured to be joined by Filipe Salbany (of Blenheim Woods fame) with a different set of 50 years’ experience, and everyone left with their heads buzzing with new concepts and hard facts contradicting conventional wisdom.

This outdoors meeting was the first for a couple of years where we shared food, which is always a jolly, bonding experience. Intermittent showers sent us scampering towards cover and huddling.

Major topics were hive design and tradeoffs compared to natural nests, swarm behaviour and genetics, spinning off into many side topics like wax moth and propolis.

It’s worth mentioning how this meeting was arranged around the bee lifecycle. Gareth chose June because in July, his bees will be in a mild forage gap and opening hives without protection would be inadvisable. He never opens hives in August, because it triggers robbing. In September another flow (ivy) begins and it is safe to open them again without hordes of starving wasps descending. Even so, he judged the day too breezy to open the hives safely and after gently peeling back a couple of top cloths to check temper, he chose not to pull out any combs. So, yes, the photo shows us among hives without protection, but not recklessly, and avoiding flight paths.

END_OF_DOCUMENT_TOKEN_TO_BE_REPLACED 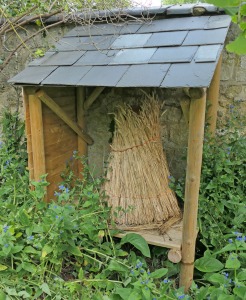 An Alveary – Jane describes it as a “swarm machine”

Jane’s fabulous apiary at Dee Cottage isn’t just the prettiest cottage garden in Oxford, it also features several really unusual hives: an alveary, cathedral hive, freedom hive and also a couple of more standard TBHs. The agenda was to inspect the Cathedral and establish whether there was a problem with one slightly grumpy TBH, but mainly to meet up, indulge in bee-related gossip, and eat Jane’s delicious cake. (Wasn’t it?)

We began the sitting-in-a-circle introductions, and then … the Freedom Hive swarmed! What a splendid opportunity of showing the beginners present how to catch a swarm! (Er… yeah, right.)

END_OF_DOCUMENT_TOKEN_TO_BE_REPLACED

~ By our Norfolk correspondent, Jan ~

Many of you know that I volunteered to be a swarm collector a few seasons ago: I’m not fearful of the bees and thought if I could help save some – before a worried owner calls a pest exterminator – then I have done some good for the environment. This has resulted in many delightful days spent moving bees around the county to new homes.

Late last summer, I got a call from a man who said he had bees in an outside sideboard on a patio in a village not far from us. We agreed he would monitor the situation, as he wasn’t sure what he wanted to do with them, but a few weeks later he called back. I went over to review the situation and found that the bees had taken up residence in a cupboard, building several healthy looking combs attached to the drawer above. They seemed quite fond of the bees, who had been buzzing in and out for several weeks now, and it seemed clear to me that moving them at that late stage might cause the colony to fail, with temperatures dropping at night, and food supplies dwindling. So, with their approval, we agreed to leave the bees where they were until this spring.

END_OF_DOCUMENT_TOKEN_TO_BE_REPLACED

18 bee-folk gathered at Paul’s out-apiary to discuss catching and hiving swarms, inspect TBHs and picnic and gabble about bees. Other topics were winter losses, the 2023 Learning from the Bees conference and mushrooms.

END_OF_DOCUMENT_TOKEN_TO_BE_REPLACED

This post discusses politics, how beekeeping / research is evolving, free living bees, and some interesting online resources. A common theme is apparent – beekeeping is increasingly swinging its attention to why local and wild bees are healthier. 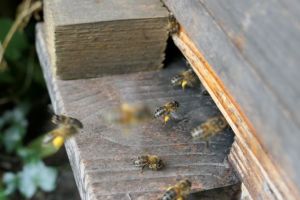