Oxfordshire hybrids vary in colour. Also, the rear areas naturally pulse darker as the bee moves / breathes and its segments (tergites) slide over the rear stripes.

Like many natural beekeepers, I am interested in having locally adapted bees, especially tough “survivor stock” from unmanaged feral colonies which thrive without treatments for varroa mites.

In observing my several swarm-caught colonies, all gathered ‘locally’, I have always wondered about their racial origins and hybridity. Colour and size variation is apparent, but sadly this is not a reliable determinant of actual genetic mix, and lacking DNA testing I had thought I may never know better than guesswork what mixes my Oxfordshire mongrel bees actually were. However, since learning about wing morphology and gaining access to a suitable microscope (see Microscopy article), I have found that I could make a study of the key races represented in my apiary.

Clearly making such a study requires a high-intervention action in that I would need to sample bees from each of my colonies. So, as a low-intervention beekeeper who believes in leaving my bees undisturbed to pursue their natural behaviours and hardly ever open my hives, why would I choose to do this? The reason is that I believe in the better survivability of local, hybrid bees (especially those with A.m.m. genes in the mix) over ‘purer’ race bees, and would like some hard evidence of this to track alongside the health of my colonies. Ideally I would like to track how my mixed-breed non-treatment apiary thrives and evolves over time; hopefully showing that hybrids can produce increasing varroa and disease resistance and reducing queen failure. A secondary reason is to gain some evidence to support anecdotal reports that A.m.m. genes are preferentially expressed in just a few years if bees are allowed to free-mate in this area. On balance, therefore, I thought the question of the racial mix of my colonies a question worth answering.

I captured ~30 foragers from the entrance of each of my 7 colonies and this article is about what I found when I examined their racial mixes.

Where do my ‘mongrels’ come from? 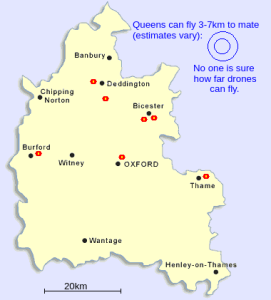 My current bees originate from all round Oxfordshire (red dots on map) and are allowed to free-mate, so are probably a good representation of local bees. I know of 13 hives and 4 feral colonies within 1km, and each queen probably mates with a dozen or more drones, so every colony has a range of workers who are half-sisters with different genetic mixes producing different strengths and weaknesses.

With 7 colonies I feel secure that I’m unlikely to lose them all at once – never say never! – so I can be more ruthless about natural selection. I support casts in their first year, to conserve their genetics until they are large enough to support themselves, but thereafter they are on their own. Swarms are plentiful, I collected 13 this year (gave away most). If I have empty hives I repopulate, preferentially from long established local feral colonies.

How I determined their racial mix 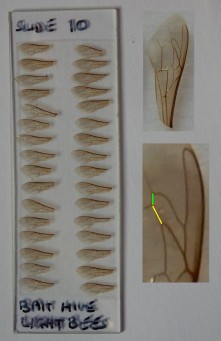 Unless you have access to DNA analysis technology, the most reliable honey bee race indicator is to examine the vein patterns of the fore-wings under a low power microscope. In particular, the ratio of two lengths, highlighted in the photo – called the Cubital Index – is straightforward to measure and a strong indicator of the dominant race in the bee’s genes. 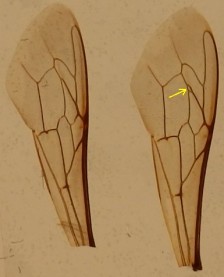 Mutant! The wing vein patterns are incredibly consistent, but I did come across one bee, on the right, with an ambiguous C.I. due to a non-standard pattern with a tiny extra cell.

Other indicators include other vein features like the characteristic discoidal angle; width of abdomen; length of hair and proboscis; but surprisingly, the colour of a bee is a poor guide to its race unless it comes from a very pure line. Most hybrid colonies show a lot of variation in bee colour. Most of the characteristics are tricky to measure – the difference between a 5 and 6mm proboscis for example – so I’m just using the worker Cubital Index for now to get an overall profile of the dominant races.

I took samples of foragers from each of my hives and plotted the results as graphs of Cubital Index against frequency of occurrence, i.e. if eight bees in the sample had CI’s of 2.1 this would show as a frequency of 8. For pure racial samples you expect to see a peaked or bell-shaped distribution around a characteristic CI, and the purer the lineage the narrower the peak. This first graph shows the spread of C.I for some common pure races – normally the range for an individual colony would be narrower:

Cubital Index spread (for workers) of races common in Oxfordshire

Edit: I’ve been told by a Buckfast breeder that the CI for Buckfasts is not very reliable generally as the Buckfast is a mix of many strains.

Results for my colonies

My sample size was 233 worker bees, so just ~30 per hive, which is just statistically acceptable to get an overall initial profile. The black columns peak around 2.1 and represent the summary result for the entire apiary – it can be thought of as a first stab at the “North Oxfordshire mongrel profile”. The smaller coloured bars are results for individual hives – click on the image for larger version.

There are a couple of colonies (hives 1 and 2) which have a lot of A.m.m. (true Black Bee) in their makeup – so let’s have a closer look at these.

Hive 1 is a random cast I picked up near Bicester this year – it is very calm and a profuse user of propolis, which may be other indicators of A.m.m., but it seems to be poor at building up stores, instead it eats all its food and keeps breeding. Looking at the profile, I think it is A.m.m. crossed with something more spendthrift like Italian, and although I fed it and hope it will, I don’t fully expect it to make it through winter as it is still light. These bees aren’t particularly dark, which illustrates how (except in very pure lines) bee colour doesn’t really tell you anything.

Hive 2 is an established colony which descends from one Gareth gave me ~ 3 years ago – he seems to have A.m.m. in his locality and is finding his bees are expressing more A.m.m. traits every year.

With hives this near our house and neighbours, aggression is not an option

Measuring wing morphometry by hand is clearly high-intervention for those ~30 bees per colony, and also time consuming and somewhat tedious, so I am considering doing this just once a year to see how the make-up of my apiary is evolving (I could then choose to encourage those colonies with A.m.m. genes being expressed). The mix is bound to change as the queens supersede and free-mate, and as I bring in replacement swarms for any deadouts.

Obviously with all this random mixing, and collecting feral swarms, I’ll need to watch for aggression and maybe need to force supersedure if I get a nasty colony. This would retain some of the colony’s genetics, whereas simply replacing the queen with one from another colony in the apiary would reduce the local diversity of ‘survivor’ genes. Another option might be to requeen with one from another local non-treatment beekeeper. However, my colonies have free-mated for the last 6 years and I have not had any aggression problems (neither have the bees!).

I’m sure the results could be improved upon /added to with additional sampling and other techniques (see section below on what I could do differently next time) but as a first pass I feel it was quite interesting and clearly shows distinct differences between colonies. I already knew each colony had a distinct “personality” regarding e.g. breeding rates, hygiene, vigour, comb building preferences, honey storage and propolis use; though their temperament is uniformly mild, even the one which is more actively guarded. These differences will be partly due to differences in hive types, colony size (some are small casts caught this year) and other environmental factors.

What could I do differently next time?

This was a first attempt at studying wing morphology and I’ve learnt some other things since, but given my low-intervention aims have yet to decide whether to do a straight repeat or alter my methodology next time (suggestions welcome!):

Breeding Techniques and Selection for Breeding of the Honeybee by Friedrich Ruttner contains a wealth of detail on techniques to distinguish A.m.m, Carniolan and Italian bees. Available from Northern Bee Books.

This article was later published in BIBBA‘s journal Bee Improvement and Conservation, issue 49