Once Covid lockdown rules were relaxed to allow up to 30 people to gather outdoors, it took Jane 6 microseconds to arrange a garden meeting at her amazing “country cottage in the middle of Oxford”. 13 of us gathered to talk about bees, the swarms we’d been chasing and hiving, and to devour cakes over cups of tea. 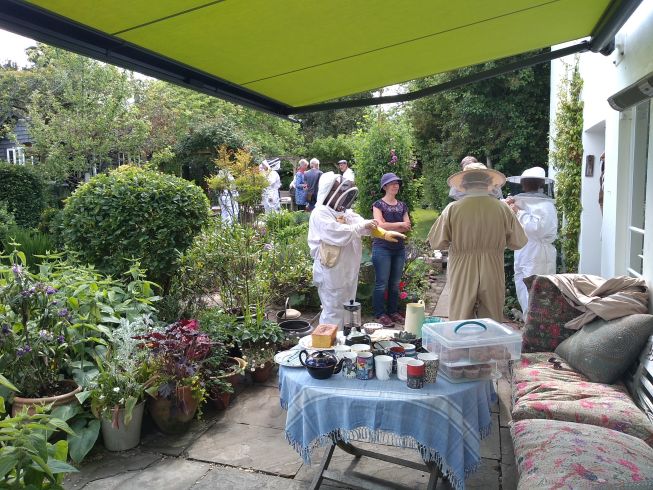 The weather was so ideal, a small afterswarm emerged from one of Jane’s hives, but it spiralled up a long way and disappeared from view. I suspect it was too small to be viable – it may find a cavity somewhere but is unlikely to build up enough stores to overwinter. If I catch a really small swarm, I merge it with another colony to form one strong one. I just let the bees sort out which queen they prefer; I find in those circumstances that the colonies don’t fight.

Swarms often begin around the end of April in this area, but it was unseasonally cold and dry for weeks, so there was little nectar for colony growth. When the weather finally warmed and cleared at the end of May, we had a couple of classic “swarm days” when all the colonies which had been bursting to go, swarmed all at once. Hectic, but fun. So far we’ve rehomed almost 40 swarms, a couple have absconded, and we’ve had to let a few go. Because the most important lesson we’ve learned over the years is:

Sometimes it’s too hazardous to catch a swarm. Let them go. There will always be another swarm.

So now when we see a swarm high up in a bendy tree with no way to get to them, we don’t risk tumbling off ladders. You can try a couple of tricks, like throwing a rope up to bend a branch down; but there will always be another swarm.

A lot of the time we are called to catch swarms, the property owner tells us “oh, they came from the colony in my roof / tree / wall which has been there for many years. They swarm every year.” Oxfordshire seems to be seething with wild colonies. We particularly prize the bees from these unmanaged colonies, for their survival traits – they thrive in our treatment-free hives.

A topic that arose was how to tell if honey is going off (it ferments and smells of yeast / alcohol, in extreme cases you see a sort of fizzy layer at the top of a jar) and how this happens if the water content is too high. There is a tool called a refractometer used to measure honey moisture content – these are available cheaply online, but make sure you get one for honey, not alcohol, or the scale will be wrong.

This led to discussions of how honey is not sterile. Its sugar content is very high, so microorganisms are inactivated by osmosis, but they are still there, waiting to be reactivated by addition of water. Don’t use it on wounds – the medical honey used for this has been sterilised by e.g.gamma rays. And don’t feed honey to children under 12 months of age – this is very important! – Their digestive system is not developed enough to neutralise pathogens.

Samples of comb, sterilised by days of freezing, were used to illustrate points and test the more experienced beekeepers. We explained how queens are guided to cells, measure their width with their antennae, and then lay eggs which develop into a large male or small female egg as appropriate to cell size. And sometimes this goes wrong (one comb featured signs of a drone laying queen or worker – capped brood poking high above the cell, i.e. a drone in a worker cell).

The queen controls male / female selection by adding sperm from her resevoir (the spermathecra organ, filled with sperm on her mating flight up to several years before). Females (workers and queens) are created by adding sperm – they have the full set of chromosomes from mother and father, they are diploid. Drones arise from unfertilised eggs and have half the DNA – they are haploid. Insect reproduction is very unlike our own genetics, but Beka grasped it immediately, because her pet tarantulas use the same system.

You can perhaps see now how drone laying, particularly in worker sized cells, can be a sign of a queen running out of sperm. You should normally see plenty of drones at a hive entrance in summer, but if you begin seeing small ones the size of a worker, that’s a bad sign.

We opened a Top Bar Hive as a demo to beginners for what you look for. The hive had 2 colonies (one each end), one a swarm from a few days before so development was quite different – for example the new colony had no drones, and soft new white comb. This hive has an eco floor and I was interested to see it was dry and not propolised.

Insulation is good, even in summer

One question which arose sticks in my memory, because I’ve heard it a couple of times recently. Is insulation good in summer? Apparently someone has written that it can overheat the bees and this is propagating around the internet. The answer is, yes, you want insulation all year round. Because it slows heat transfer in both directions. Once the bees have got the conditions inside the hive as they want (about 35C, high humidity round the brood) it takes effort (fuel) to keep them constant. If you smooth out (slow) variations as, say, clouds go in front of the sun they don’t need to keep frantically working to keep conditions optimal.

A big thank you

to Jane for being such a perfect hostess and allowing us to wander around and poke things. And a big thank you to everyone who cooked the food!

A word about this blogsite

WordPress have changed the editor for this site to a “simpler” version which is really difficult to use. I can’t yet see how to put captions under pictures, make text flow round them etc. The idea is obviously to incentivise people to pay for a WordPress subscription, which gives access to a usable editor, but the effect is to make it significantly trickier to create a post. So posts may become less frequent, and look less polished.

This highlights an issue with information on the internet. Information decays. This site has been going for 9 years or so, and has over 200 articles, but good luck finding them. I know they exist and sometimes when people ask a question, and I can point them directly at a pre-written post on the topic, but much of the data on here has been buried by later posts and searching is tricky. Perhaps people will begin using books again.

This entry was posted in Uncategorized and tagged Swarms, TBH. Bookmark the permalink.